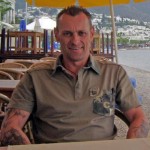 I am a 63-year-old Welshman living in Buckinghamshire, England. I was brought-up in Snowdonia and by a family of teachers, historians, and poets. My father: one of 11 children was the Headmaster of my infant and junior school. This was Llanllechid Primary in Rachub; a tiny stone and slate village, situated high in the cold foothills of Snowdon and above the small town of Bethesda. With so many uncles and aunts (four of whom were teachers) and countless cousins, I was lucky enough to receive a ‘proper’ Welsh education and imbued from infancy with a deep and abiding love for our ancient and glorious history.

My blind Taid (Grandfather) was an orator and a storyteller of note, and I recall vividly our huge family squashed into the front parlour in Nain and Taid’s terraced house on Madoc Street, Porthmadoc, listening to his tales. The whole family would be there for his historical stories, with all the doors thrown open, and the tiny little two-up/two-down terraced house would be jam packed. Told with an elder-teacher’s love of his language and in a deep and musical baritone I can hear to this day, he was inspired to verbosity perhaps by his blindness, but we could all tell he enjoyed it.
I can still smell the coal fire and the whisky, the sweet sherry and the fragrant smoke that curled from his long pipe as he spun wondrous images before our eyes, firing our already vivid imaginations with tales of dark Druids and magic, glimmering warriors like Lludd Llaw Ereint (silver-hand) and Lleu Llaw Gyffes (agile-handed), both of whom feature in these stories. Always dressed in a pinstriped three-piece suit, Taid would stand by the mantelpiece, puff his pipe, and talk for hours whilst my brother and I would sit on the floor in one corner, completely entranced. He spoke of God-like, ancient warriors like Beli Mawr, even great Arthwr Fawr, and a huge, terrifying giant called Yspaddaden Pencawr, who lived nearby and actually ate naughty children! This then was the foundation to my historical and cultural education, which is of course a never-ending process.

I have been writing creatively for over forty years, and these truly ancient stories of my Grandfather have been simmering inside me for as long as I can remember. So, six years ago I gave up my work as a freelance writer and set out to commit some of these ancient tales to text. The main theme of these stories was usually the Romans and Julius Caesar’s invasions of 55 & 54 BC, (The Mabinogion era) and so I set out to research these ancient and largely untold events, with a determination to bring these almost forgotten stories back to life and into the 21st century. In that time, I have managed to produce a trilogy of historical fiction novels encompassing these portentous happenings from more than two millennia ago, entitled; Iron Blood & Sacrifice; (The Sons of Beli Mawr, The Sacking of Bidog & Return of the Yellow Dog).

I am hoping this new trilogy of historical novels will appeal to a broad readership, and not just those who are interested in our ancient history, as they are novels of adventure, love, and bloody conquest at the end of the day. They also have a somewhat old-fashioned streak of romanticism running through them, as they were written by an incurable romantic in a proud Welsh tradition.